The Mintec Benchmark Prices [MBP] for Wheat Milling 11% DDP Rouen FR was assessed at €293.00/mt, down €5.00/mt week-on-week (w-o-w). The pressure continued this week on the wheat market due to competitive Black Sea supplies, underestimated Australian crop size and a slight improvement in Argentinian weather. Also, many buyers have covered their requirements through the beginning of 2023 and have not yet re-entered the market.

As of last week, Australian wheat harvesting was 80% complete, with better-than-expected yields. According to a Mintec source, “a record high Australian wheat crop [estimated at 42 million metric tonnes / USDA 36.6 million metric tonnes] could add further pressure on the prices, but most likely the further price direction will be determined by the size of the Northern hemisphere crop. The demand is there. It is more supply side that will be a price driver in the coming months.” A Mintec source added, “there are fewer quality issues than was previously expected. The question is now around how much Australia will be able to export – there are export capacity constraints.”

Ample Russian wheat supplies and a weaker rouble (against the USD) are increasing the export competitiveness of Russian wheat and continue to pressure the global wheat market. According to various market sources, Russia is estimated to export approximately 3.6-4.0 million metric tonnes of wheat in January. There are currently some concerns around winter crops as temperatures have dropped to -25°C in some regions of Russia, Ukraine and some parts of Europe, and not all fields have enough snow to protect crops from freezing. Market sources stated that there would most likely be some damage, but hopefully, that will be insignificant.

Furthermore, there has been a growing concern since the beginning of this year, with vessel insurance for ships that are sailing through the Black Sea. Market participants have told Mintec that there is a growing number of companies that are not willing to provide war risk coverage for vessels from Russia, Ukraine, and Belarus. Thus, this could have a bullish impact on the market as fewer grain supplies will be available from these regions. 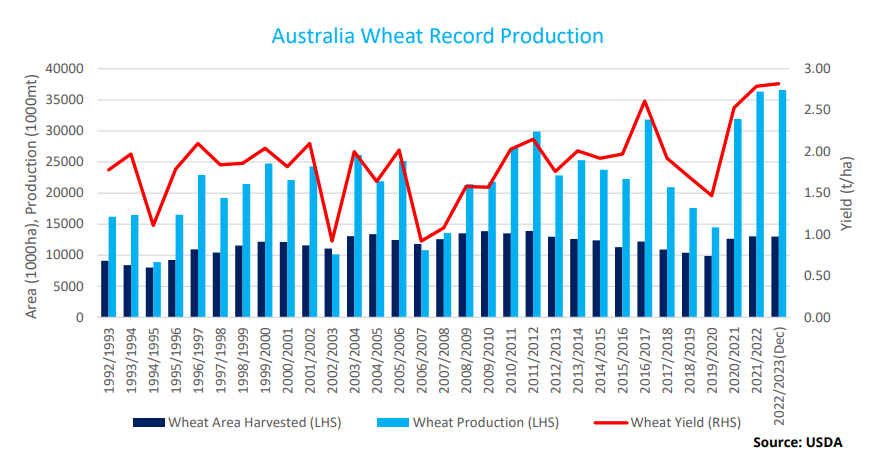