The headline figure for the USDA subjective almond forecast, released on 12 May, aligned with the majority of industry expectations at 2.80 billion pounds with one market participant describing the release as “neutral for the market”.

The USDA yield forecast of 2,040 pounds per acre comes in lower than the yield estimates from Terra Nova Trading (-3%), released on 12 April, and Wonderful (-2%), released on 11 May. When adjusted to use the Land IQ area multipliers the USDA yield returns a figure of 2.73 billion pounds, below industry estimates which have clustered around the 2.80 billion pound mark.

Mintec sources surveyed on US almond production returned a range of 2.67-2.88 billion pounds, with most market participants submitting estimates close to 2.78-2.83 billion pounds. Following the release of the subjective estimate one US almond exporter said, “the subjective is a little lower than I expected when you use the Land IQ acreage, but at this point it feels like the carry is the bigger question and if we will manage to get it close to 800 million pounds.” 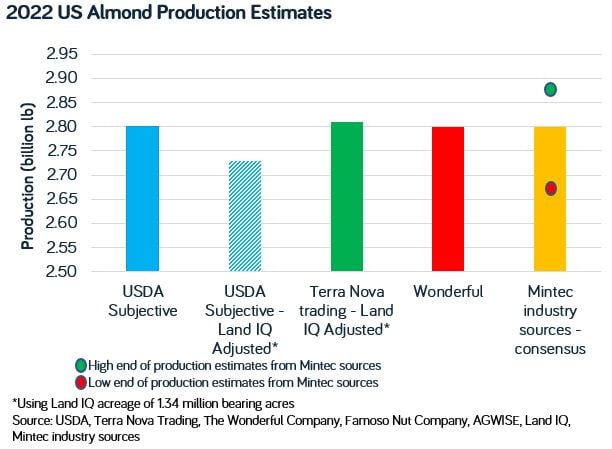 The size of this season’s ending stocks has been a key focal point for the market over the past several months. Prior to the release of the March position report many market participants were expecting a figure north of 900 million pounds and close to a billion. Since then, attitudes have shifted with strong shipment figures in March and April bolstering seller hopes that ending stocks may end up closer to 800 million pounds.

For ending stocks to hit 800 million pounds, an average of c.242 million pounds per month would have to be shipped for the remainder of the season. One market participant described this as a “tall order, but possible, which three months ago I wouldn’t have said”. 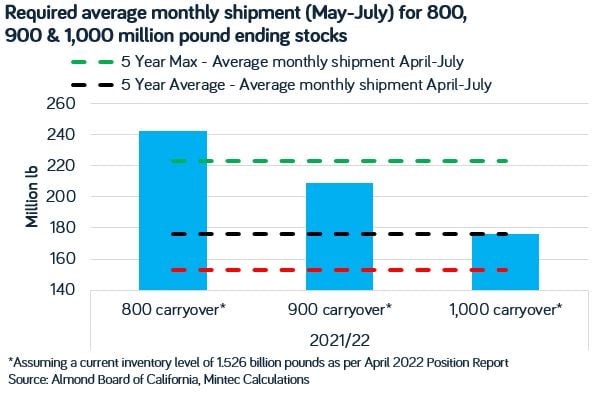 Most industry participants contacted by Mintec suggested that they believe that the carry is likely to be between 850-900 pounds. Several exporters cited concerns that shipments could be hampered again if Chinese manufacturing and exports pick up again post-lockdowns in the country.

“We seem to be benefiting from the lack of exports coming out of China at the moment and ships don’t seem as eager to go straight back to Asia after stopping in Los Angeles, so we’ve had more heading into Oakland. I am slightly worried that when Chinese manufacturing kicks back into gear we could see vessel availability start to tighten again,” a US almond exporter said to Mintec.

There is still some talk in the market regarding the acreage figures being used, with several industry participants remarking that they expect the acreage numbers to move downwards. The ongoing drought in California, along with surging costs of production, has led to many growers intending to increase abandonment and removals of almond orchards over the season.

The Objective USDA almond forecast, which is due for release on 12 July, will provide the next “official” indication on production for the US crop. Until then, market participants will be closely monitoring the shipping situation out of California as exporters fight against logistical issues and attempt to push the carry as low as possible before the new crop comes onto the market.