Tepid demand for larger sized vannamei (whiteleg) prawns from India’s key-producing state of Andhra Pradesh weighed on farmgate prices during week 31 (August 1-7). Indeed, Mintec’s average ex-farm prices of 30-count and 40-count vannamei fell by 1.2% w-o-w and by 1.4% w-o-w respectively during the latest reporting period. The prices for low-count prawns peaked at eight-year highs in Q1 2022, as farmers reduced stocking density in 2020, due to the fallout of the COVID-19 pandemic, low profits, and high prawn mortality rates. This caused a shortage of the larger sized prawns with farmers harvesting early at lower individual weights to minimise stock losses. A demand rebound in early-2022 also underpinned low-count prawn prices. The cost-of-living crisis has eroded some restaurant demand in North America, an important market for larger-sized Indian vannamei. Logistics costs from India to the US are a major constraint, considering that Indian exporters are often competing with Ecuadorian producers for US market share.

Despite the dip in low-count prawn prices, average prices for smaller-sized higher-count (70 and above) vannamei increased w-o-w in week 31. The largest uptick was seen in the 80-count category, where the average ex-farm price from Andhra Pradesh increased by 5.7% w-o-w, compared to 5.3% for 70-count and 2.0% for 100-count. Market sources confirmed that low count prices have been gaining support from a surge in Chinese buying. Chinese seafood imports were significantly subdued during Q2 2022, as resurging COVID-19 cases prompted nationwide lockdowns and port restrictions. Chinese demand has gradually improved, with import restrictions less stringent. A source revealed how port clearance times in Shanghai averaged less-than four-days in July, compared to two-and-a-half weeks waiting in May. Chinese prawn imports typically accelerate late in the third quarter, as buyers look ahead to the Lunar Year celebrations in February. However, it is more probable at this stage that latent Chinese demand is being satisfied, rather than buying ahead for Q1 2023.

Click to find out more about other commodity prices. 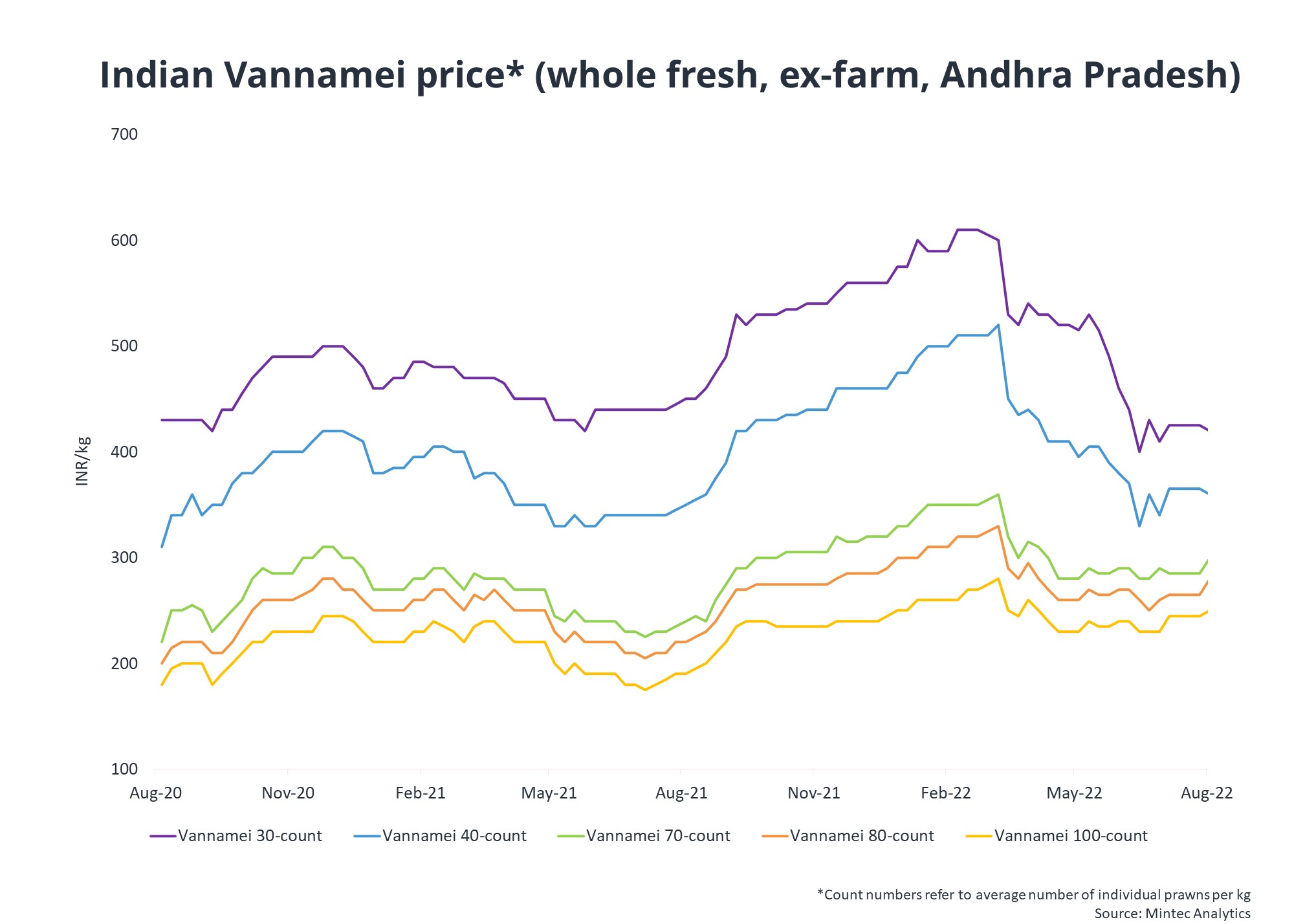