The price of arabica coffee futures at the InterContinental Exchange (ICE) New York (NY), the main trading hub, averaged USc 219.8/Ib on the week of 18th May 2022, representing an increase of USc 8.4/Ib (+4.0%) week-on-week (w-o-w). The uptick occurred amid heightened frost risk in the main producing region of Mina Gerais in Brazil, the world’s top arabica producer. Arabica plants are particularly sensitive to cold weather at all stages of development. During the harvest period, which typically commences from May through September, frost burns can cause unsalvageable damage to ripe coffee cherries, thus reducing farm yields.

The ICE NY benchmark had previously fallen by USc 19.1/Ib (-8.3%) during the four-weeks ending 11th May 2022 to USc 211.5/Ib, as above-average rainfall eased supply concerns in Brazil. The downtrend was accelerated by the USD appreciating by 8.9% against the BRL during the same four-week period. There is often an inverse relationship between the strength of the USD vs BRL and the ICE NY price. A stronger USD implies BRL-denominated coffee exports to the NY exchange become comparatively cheaper when converted into USD. Moreover, a weaker BRL encourages Brazilian coffee exports, due to the favourable returns for domestic sellers. 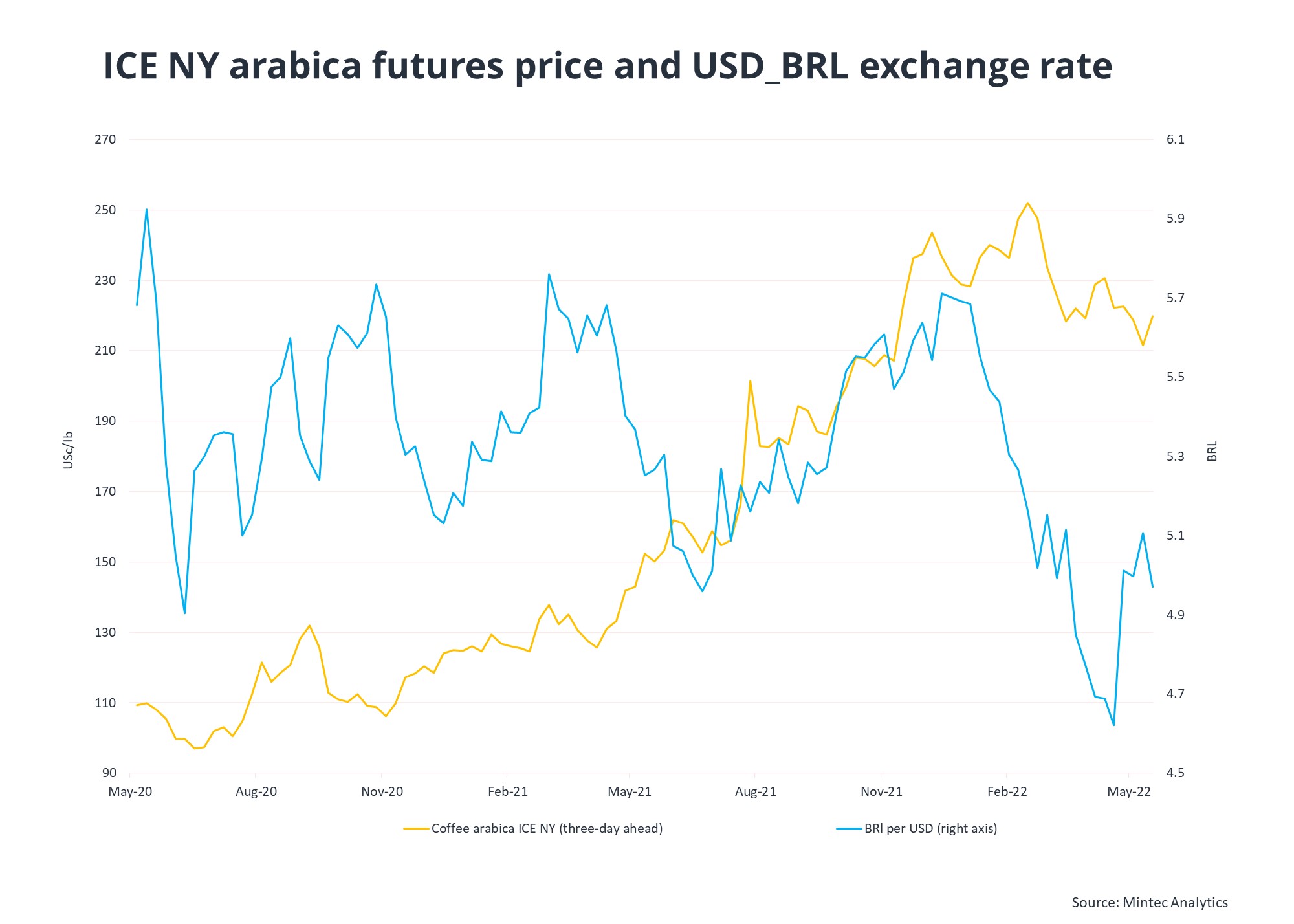 However, the latest rebound in the NY arabica price may be relatively short-lived. Despite the concerns, many stakeholders do not expect the cold weather to reach the plantations of Minas Gerais. Above-average rainfall has also been recorded in some of the coffee-growing regions since 10th May, which may support cherry development, thus providing a supply boost.

Regarding demand, ICE NY prices began to slide in the immediate aftermath of Russia’s military offensive on Ukraine. Russia is the world’s fifth largest coffee importer, although mainly robusta, yet the economic ramifications of the geopolitical uncertainty are wide-reaching. Concerns of a prolonged global recession limiting coffee demand, particularly in Europe, the world’s largest coffee market, highlight a bearish backdrop. Reports that the geopolitical uncertainty led speculators to liquidate long positions in coffee, in favour of safer assets like metals and the USD, appears to further confirm the demand depletion. The ‘cost-of-living’ crisis, fuelled by surging global inflation, is also detrimental to coffee purchases, as consumers look to scale back spending, particularly for luxury goods, which coffee is to many lower-income families. This ‘demand destruction’ is compounded by the re-emergence of COVID-19 outbreaks and subsequent lockdowns in China, another key market, where economic growth slowed significantly through April 2022.