Since peaking at a record high of NOK 54.96/kg on week 22, beginning 30th June 2022, the Norwegian cod price (frozen head and gutted (H&G) 1-2.5/kg) fell by NOK 3.66/kg (-3.7%) to NOK 51.30/kg by week 27. This was partly related to weaker crude oil prices, as the Intercontinental Exchange (ICE) EU Brent crude benchmark price reached USD 100/barrel by mid-July, from USD 118/barrel a month earlier. Crude oil-based fuel is one of the main cost components for cod-fishing fleets, so lower crude prices would typically be associated with falling fish prices. There was also some demand pressure, according to one market source, as some European buyers went on summer holidays, thus delaying procurement.

However, as of week-28, commencing 11th July 2022, the Mintec cod price had rebounded by NOK 2.45/kg (+4.8%) w-o-w, to NOK 53.75/kg, with expectations of NOK 55/kg being breached by the end of the month. Indeed, this latest price represented a 68% y-o-y increase. Despite a continued decline in crude prices, the uptick appears to reflect tightening supply fundamentals with Norwegian frozen cod exports reportedly almost halving w-o-w during week-28. This is partly related to limited availability due to robust buying from China, the US, and the UK, respectively, during the preceding weeks.

Another key factor that has supported cod prices during this calendar year is the war in Ukraine and the consequent sanctions placed on Russian seafood exporters by Europe and North America. Russia has accounted for over 40% of cod imported into Europe since 2017, followed by Norway with approximately 35% of the import volume. Thus, the war has disrupted substantial flows of frozen cod into Europe, increasing the burden on Norway. Moreover, the cod catch quota in the Barents Sea that is shared between Norway and Russia, was reduced by 20% in 2022 for sustainability reasons, further exacerbating the tightness currently seen in Europe. Based on current dynamics, and with demand anticipated to escalate through August, as buyers start returning, the cod price could surpass NOK 60/kg during Q3 2022, according to one trader. 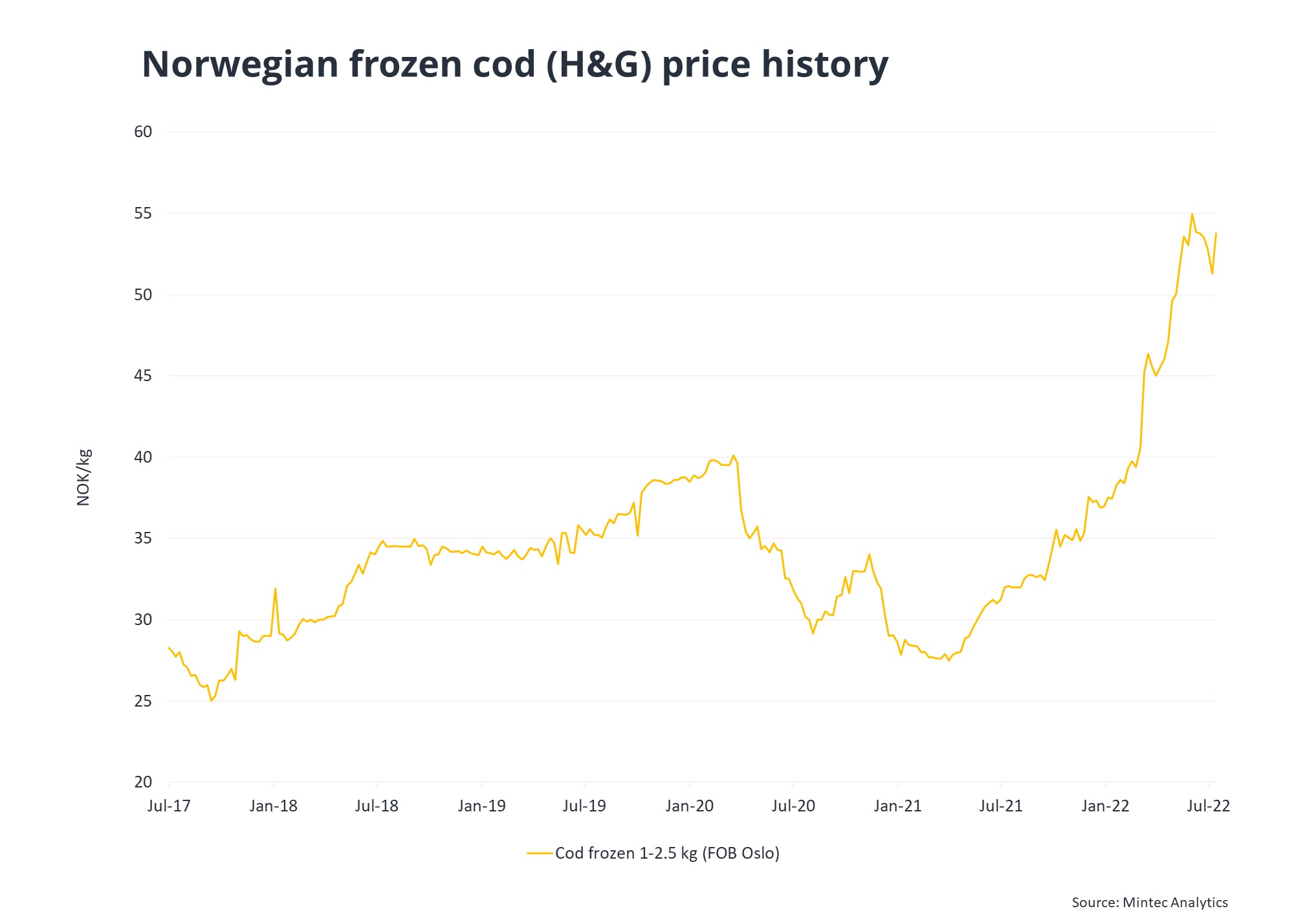