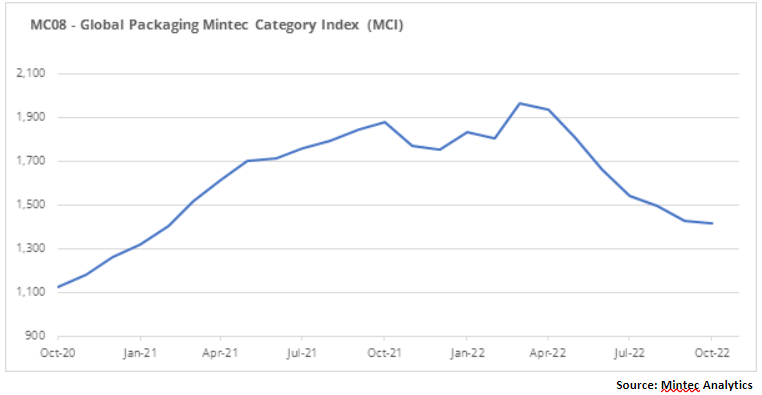 The Mintec Global Packaging Category Index (MCI) declined in October 2022, down 1% month-on-month (m-o-m) to USD 1,414/MT. The decline in the index appears to be slowing and seems close to hitting a price bottom. However, it is still possible that there may be a further decline in the price of raw materials, combined with lower demand. Energy prices, which have fallen slightly since September, may begin to rise during the winter months.

In October, prices in the plastics market in the EU and the US showed a decline. Prices in the US fell at a sharper rate. What stood out was price stabilisation and fixing deals in the European PP market.

EU HDPE and LDPE prices in October followed the same downward trend. HDPE declined 2% m-o-m and 5% y-o-y, to EUR 1,678/MT. The LDPE price was EUR 2,043/MT, down 1.4% m-o-m and 7% y-o-y. Prices have fallen for five consecutive months, but the rate of decline has been slowing. Production cuts have led to a more equal balance between supply and demand, and this has been reflected in prices. Lower demand has also forced suppliers to reduce prices. However, producers no longer appear willing to make serious concessions, having realised that prices are close to a bottom. PET prices in the EU fell 3% m-o-m in October, to EUR 1,613/MT, but it is worth noting that this is a slower rate of decline compared to the 7% decrease in September. The price is up 26% y-o-y. Weak buying activity reflected poor demand amid fears of a recession, even for cheaper imported products. Full warehouses also meant that buyers could afford to pause and wait for prices to fall. The PP price in October stabilised and, due to increased consumer activity, there may be a slight price increase in November. The average PP price in October was EUR 1,605/MT, down 13% y-o-y. There was buying activity in the market, which indicates that a balance has been reached between supply and demand.

The US HDPE price in October decreased to USD 1,687/MT, falling 4% m-o-m and 35% y-o-y. Additionally, the US LDPE price in October declined to USD 2,116/MT. This constituted a fall of 7% compared to the previous month, and a 37% decline compared to the same period in 2021. These downward price movements are largely due to weak market demand. Also, high inventory levels have been putting pressure on prices. A gradual increase in interest rates is negatively impacting consumers and market sources expect prices to fall in November.

In October, US PET prices collapsed by 21% m-o-m to USD 1,907/MT. This was the sharpest price drop among the packaging material prices this month. Producers have accumulated large stocks and are now eager to sell, although demand remains weak and purchasing activity is minimal. However, the price is still almost 2% higher compared to the same period in 2021.

Aluminium prices appear to have bottomed as a result of high electricity costs. Consequently, prices have been stable for two consecutive months. Steel prices have continued to fall, because of cheaper raw materials.

The LME aluminium (3-month) October price was flat m-o-m, with a monthly average price of USD 2,249/MT. Rising electricity prices have been reflected in the reduction of some aluminium production capacity in the EU. Therefore, almost one million tonnes of European primary aluminium production capacity has now been shut down. Production of aluminium is an energy-intensive process, and in spite of the fact that energy prices have started to decrease in Europe since September, costs for producers remain high compared to the beginning of 2022. It is not economically feasible to maintain normal production levels at current market prices. Traders may see a slight stabilisation in prices and start buying LME stocks, because they have been rising for two consecutive months.

The global market is now characterised by oversupply. Demand for steel in all regions of the world is at a low level, therefore producers with competitive production costs that did not want to cut production redirected steel to exports. Thus, importing countries are now under pressure from large volumes of cheap imports. The CME's US steel hot-rolled coil (HRC) price decreased by 10% m-o-m and 53% y-o-y, to a monthly average price of USD 798/MT in October. The performance of the consuming industries in the US is showing optimistic figures in comparison with other countries around the world. From a demand perspective, therefore, the situation in the US looks relatively solid. But the global downward price trend and worsening industry expectation indices have significantly constrained purchasing activity in the country.

The Northern Europe HRC price dropped by 7% m-o-m and 30% y-o-y, to EUR 725/MT. EU steel-consuming sectors are in decline. The EU Construction Confidence Indicator turned negative for the first time in 19 months in October, and steel consumption in the automotive sector fell in Q3 and is expected to fall by 3.6% in Q4. In addition, the costs of steel production in the region began to drop in October and there was a decline in iron ore prices. Furthermore, steel scrap prices and energy costs in Europe also fell in September and October.

Iron ore prices fell by over 6% m-o-m in October 2022, and it is worth noting that the quote broke the 2021 low at USD 87/MT CIF China in the last week of the month. This decline had a fundamental impact on steel production costs, especially for flat steel. Flat steel is predominantly produced in converter furnaces where pig iron, made from iron ore, is used as the main raw material.

Paper prices in October on the EU market were relatively stable. Only French Kraftliner prices decreased, following weak demand and lower prices for brown recovered paper.
The October price for French Kraftliner 175g was down by 3.1% m-o-m, to EUR 925/MT, a decrease of 2.3% y-o-y. This was in contrast to a trend of rising prices in September. According to market participants, the lower cost of energy and recovered paper will put upward pressure on prices. However, a downward trend in energy prices is not visible, as the region enters the winter period. It is possible that gas prices could begin to rise. The price of semi-chemicals fluting in October remained unchanged from the previous month, but is up 5.6% y-o-y to EUR 928/MT. The market has not yet responded to the general trend of lower production costs. Demand and supply were balanced, therefore supporting a flat price trend.

The October GD2 price remained at the same level as September, at EUR 1,785/MT, but showed a 53% y-o-y increase. EU GC2 price increased by 31% y-o-y, to EUR 2,045/MT, but remained stable m-o-m. Both prices have consolidated at historically high levels. Cartonboard producers had a five-to-six-week backlog of orders and undertook price increases in a bid to pass on the high production costs to consumers. However, market sources said that demand had started to fall in all European regions by the end of October and that sales were sluggish. Consumer demand fell and cardboard makers were forced to lower prices to the September level.