The USDA published its subjective 2021 California almond forecast on 12th May, estimating the size of the upcoming 2021 almond crop at 3.2 billion pounds, 3% above last year’s production of 3.1 billion pounds. The estimate is based on a bearing acreage of 1.33 million acres, 6% more (+80,000 acres) than last year, and a production yield of 2,410 pounds per acre, a decline of 3% year-on-year but the third-highest yield on record.

The production estimate has mostly taken the almond industry by surprise, with the majority of market participants surveyed by Mintec predicting a crop size of between 2.9 and 2.95 billion pounds. These industry players cited larger decline in yields than forecast by the USDA, following record harvests in parts of the Central Valley last year, as well as higher proportion of tree pullouts. This was in line with existing industry estimates, with the Terra Nova production estimate coming in at 2.9 billion pounds (adjusted with the land IQ area release) and the Wonderful Almonds & Pistachios projecting the size of the upcoming crop at 2.95 billion pounds. 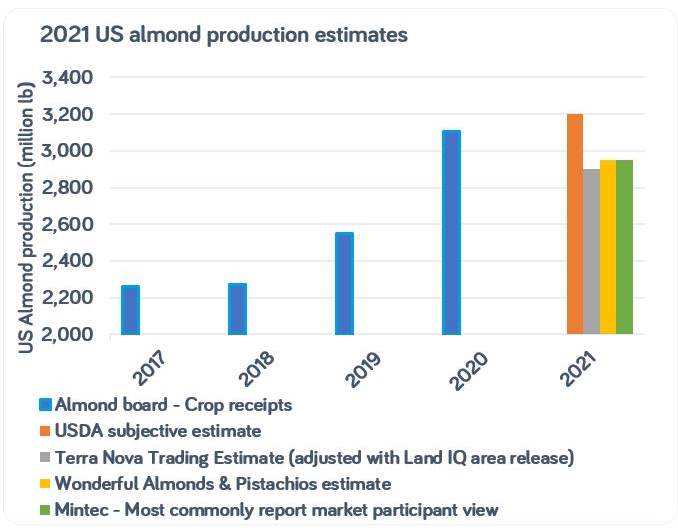 One seller commented – ‘I don’t understand how they arrived at this figure given that it is based on a phone survey and I wonder if farmer psychology has played into this. It always seems to be the case that farmers overestimate their yields while commenting how bad their neighbours' crops are coming along and this characteristic seems to get more frequent in challenging growing conditions.’

The USDA anticipates the bearing acreage to increase annually by 80,000 acres, although some stakeholders believe this to be an over-optimistic projection, given the farmer’s willingness to remove less productive, older trees amid the subdued market prices. The Land IQ standing acreage release estimated a removal of 47,803 acres which some market participants believe to be closer to 60,000-70,000.

A US producer stated – ‘We haven’t actually managed to get all of our trees pulled yet as the removal companies are too busy at the moment to deal with the demand. This means that it looks like they are still productive but we’ve turned off irrigation and won’t be harvesting. I know plenty of farmers in the same position and this could throw off the use of satellite imagery. As a result, in my opinion, we’ll have to wait for the updated land IQ release in November to get a better idea of the actual removals.’

On the back of the data release, the market fell late last week with trades for standard 5% almonds reported at $1.79-1.80/lb on Friday (14th May), down 7-8 cents/lb from the last assessed Mintec Benchmark Price of $1.86/lb. New crop pricing also fell significantly with trades at $1.80/lb, at parity with current crop and down 10 cents/lb on the week.