The Mintec Category Index (MCI) for European cereals is trending at an all-time high, reaching EUR 232.6/MT on 10th September 2021, up by 33.6% compared to the same period the previous year. The index has trended upwards since mid-July 2021, with maize (corn) and barley prices rising on the back of increasing wheat prices. The increase in wheat prices was mainly due to a downward revision to the 2021/22 global production estimate by the United States Department of Agriculture (USDA), which reduced harvest expectations in several major exporting countries (US, Canada, Russia, and Kazakhstan). Consequently, the August average price of Euronext wheat rose by 15% m-o-m and by 33% y-o-y, to EUR 241.6/MT. In addition, excessive rains in July have delayed wheat harvest and raised grain quality concerns in France and Germany, two of the main wheat producers in Europe. At the same time, high temperatures had lowered yields in Poland and northern Europe.

The Euronext maize price has increased on the back of lower-than-initially expected maize production for the 2021/22 marketing year (MY) and adverse weather conditions. July’s heatwave in southeastern Europe limited yield potential in Hungary and Romania - the two major European maize producers. The August average price was 31% higher y-o-y, at EUR 216.9/MT, mirroring the bullish global market following tight maize supplies in 2020/21.

Furthermore, barley prices have also strengthened, mirroring the wheat market and a tighter global supply, thus supporting the EU cereals MCI. Barley prices will likely remain firm, supported by wheat prices. European wheat and maize prices are likely to be determined by the crop developments in the global market. The market’s attention will be turned towards the production estimates for maize as the harvesting season for the 2021/22 MY start in the northern hemisphere. Meanwhile, speculation over wheat acreage for the 2022/23 MY may influence wheat prices in Q4 2021. 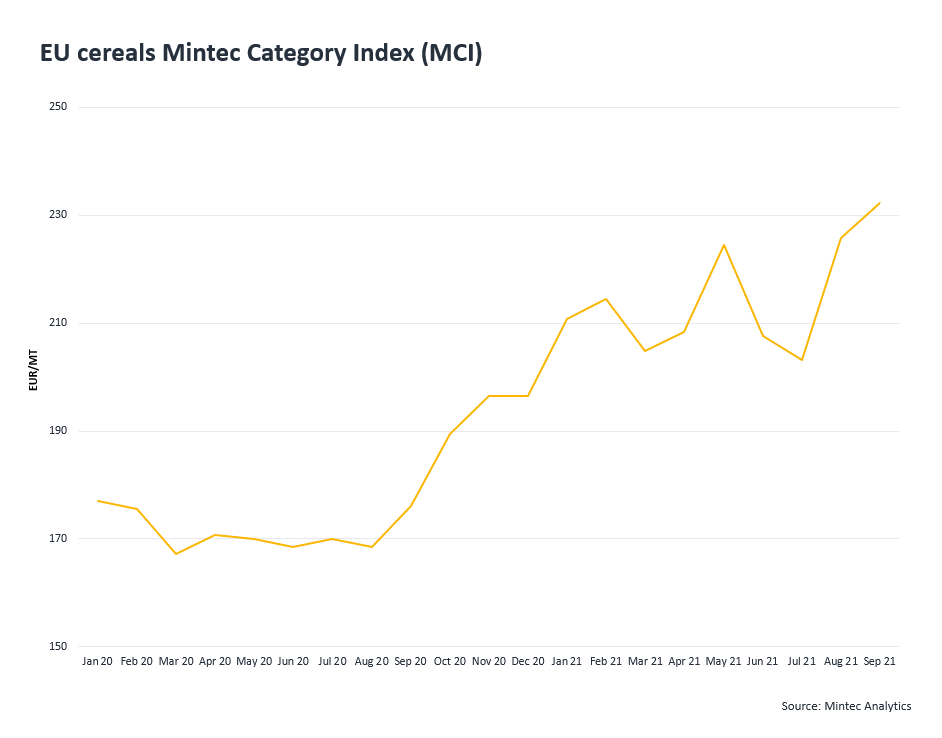