Average sugar futures prices at the InterContinental Exchange (ICE) NY peaked at a three-and-a-half-year high in January 2021, as tight supply projections fuelled bullish investor sentiment. At USc 15.48/Ib, the NY benchmark increased by USc 0.7/Ib (+4.5%) week-on-week (w-o-w) for the period ending 20th January 2021. This is the highest weekly average since late-May 2017 and continues the broadly bullish streak evident since April 2020. Indeed, the average price of USc 15.14/Ib for the first three-weeks of January 2021 represents respective year-on-year (y-o-y) and month-on-month (m-o-m) increases of 7.1% and 3.3%.

The firm pricing is supported by speculation regarding weather-impacted supply tightness in Brazil and Thailand, respectively the world’s top two sugar exporters. Thai sugar output during the first month of 2020/21 marketing year (MY) that commenced in December 2020 was reportedly 2.1 million tonnes lower (-43%) y-o-y, according to data released by the domestic Cane and Sugar Board. Thai sugarcane production has been hampered by extreme aridity over the last twelve months, and domestic sugar output is projected to fall by 450,000 tonnes (-5.4%) y-o-y during the 2020/21 MY, according to the US Department for Agriculture (USDA).

The La Nina weather pattern threatens to undermine Brazilian sugarcane yields, due to potentially low soil moisture levels caused by the dry conditions. La Nina is likely to persist through Q1 2021, which coincides with the final quarter of Brazil’s 2020/21 sugar crop. Recent reports suggest that sugar production in Brazil’s key Centre-South region contracted by almost 11,000 tonnes (-14%) y-o-y during the last two-weeks of 2020. However, this is caveated with firm y-o-y Centre-South production for the full month of December 2020. Additionally, weak ethanol demand caused by the COVID-19 pandemic implies that local mills will increasingly favour sugar production. Indeed, La Nina notwithstanding, Brazilian sugar production is expected to reach a record of 42.1 million tonnes in 2020/21, representing a substantial 12.1 million tonnes (+40%) y-o-y increase.

The Indian Sugar Mills Association reported in late-January 2021 that year-to-date sugar production for the 2020/21 MY, starting October 2020, increased by 3.4 million tonnes (+31%) y-o-y to 14.3 million tonnes. The Indian government also authorised INR 35 billion (USD 475 million) worth of sugar export subsidies for the current MY, potentiating up to 6 million tonnes of Indian sugar trade. 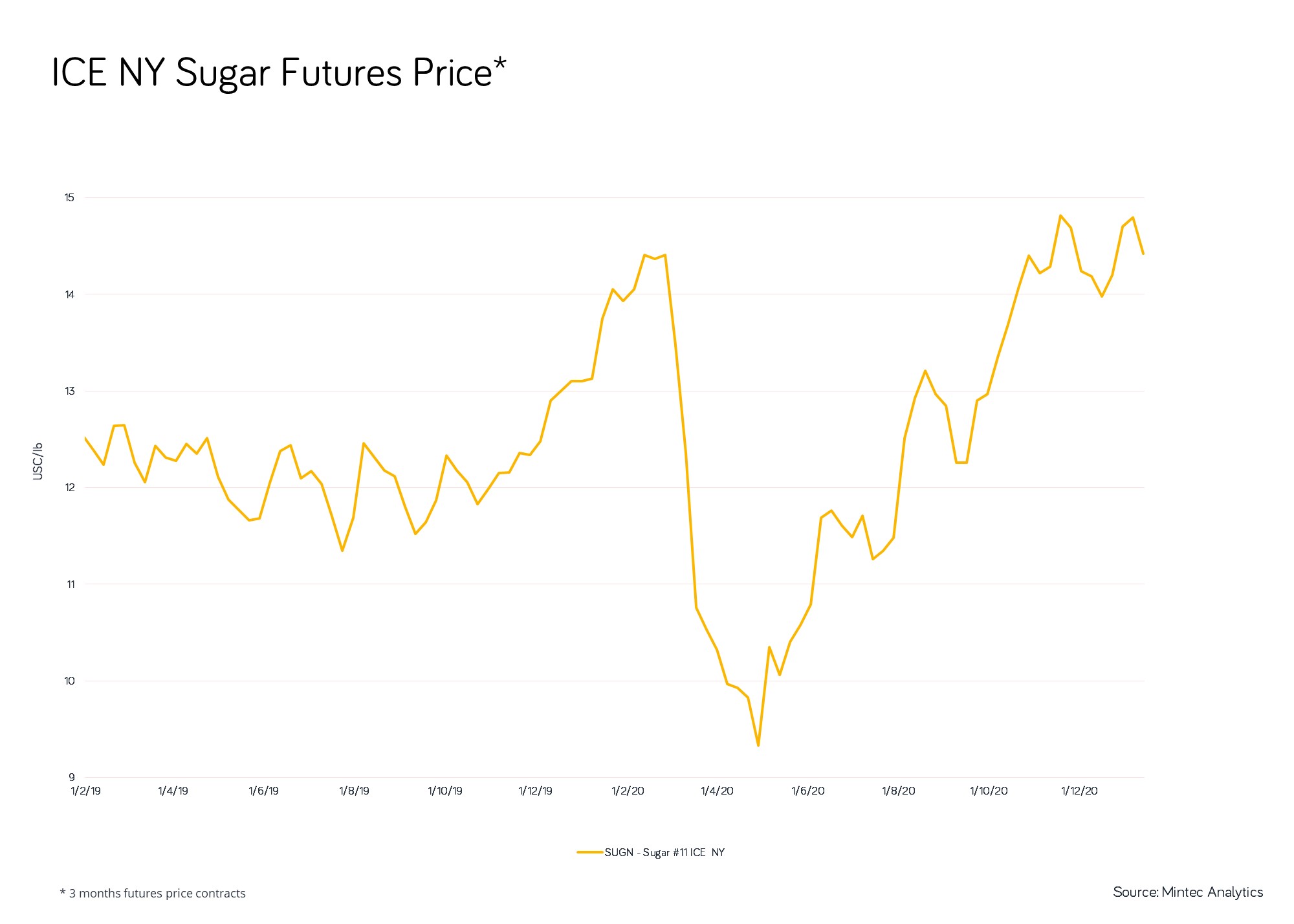