The Mintec price of Hungarian green peas rose by 29.7% to HUF 1,200/kg in the last three weeks up until the 11th of August 2021. Green peas are one of Hungary's most produced open-field vegetables, covering approximately 8% of the total vegetable growing area. The biggest buyers of Hungarian green peas are Russia, Germany, Italy, France and the Baltic States. The price increase is attributed to supply shortages, following the abnormally hot weather in recent months. Green peas are cold tolerant vegetables (can endure as low as -15°C), with a relatively short production cycle of approximately 30 days. They are not, however, prone to tolerating extreme high temperatures. This, and the lack of rain, are hampering the development of pea pods and thus, harvested crop during this season will be approximately 25% below normal levels.

According to the Hungarian Bureau of Statistics, green pea production has been relatively stable over the last three years, amounting to around 90,000 tonnes per year. However the UK, being the largest producer (160,000 tonnes per year) and consumer of frozen green peas in Europe, also witnessed extremely high weather temperatures in July 2021. Spain and Portugal experienced a similar situation with a poor harvest in the 2021 season. Considering the hindered production amongst the EU’s key players, Hungarian green pea prices are projected to head further north in the short term. 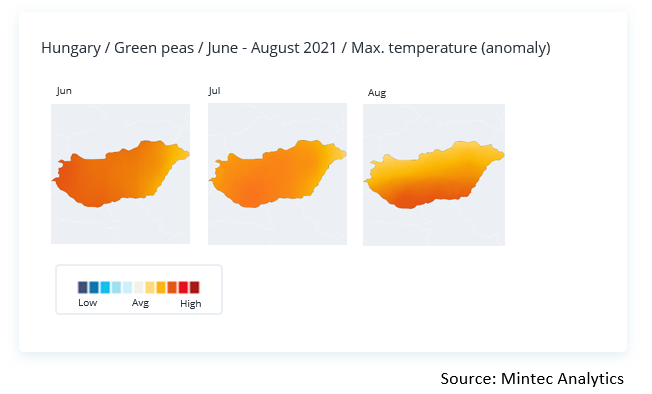