Cocoa farmers in the world’s top producer, Cote d’Ivoire, are being boosted by improving weather conditions at the start of the 2020/21 main crop harvesting year. Ivoirian farmers produced 1.69 million tonnes of cocoa during the 2019/20 main crop season (October to March), which was roughly on par with volumes produced the previous year. However, the mid-crop (April through September) was negatively impacted by extremely dry Harmattan conditions, and up to 100,000 tonnes of expected crop was consequently lost.

The lower-than-anticipated mid-crop was partially offset by the demand-dampening effects of the COVID-19 pandemic on cocoa-based beverages and confectionary in the major western markets markets. Indeed, the respective USD-denominated cocoa bean futures prices at the major InterContinental Exchanges (ICE) in London and New York fell by 10% and 5% between April and July 2020. Future prices rebounded from mid-July as the extreme aridity in West Africa fuelled speculation regarding the upcoming crop season. The New York ICE price increased by 17% between July and September, while the London price rose by 14% during the same period, with both benchmark prices exhibiting strong year-on-year (y-o-y) growth.

However, the main crop outlook is boosted by reports of above-average rains, mixed with sunny spells during the first half of October, providing ideal pod ripening conditions. Farmers said good weather in November would also strengthen the crop in February and March, potentially paving the way for a larger-than-anticipated harvest. Notwithstanding, an increasingly dire global demand backdrop supports a bearish tone. The Cocoa Association of Asia reported a 10% y-o-y drop in Q3 2020 grindings, while grindings in New York and Europe fell by 4.7% and 4% during the same period according to the respective cocoa processing bodies. October is typically the strongest demand point of the year, due to Halloween festivities across Europe and the US. However, the social distancing measures in place are certain to undermine consumption.

Thus, improving demand expectations against tepid demand projections look set to weigh on prices through Q4 2020. Mintec’s NY ICE futures price fell by USD 219/MT (-8%) in the four-weeks ending 21st October 2020 to USD 2,382/MT. Meanwhile, the London ICE price fell by EUR (USD 211/MT) (-10%) during the same period to EUR 1,829/MT (USD 2,171/MT). The upcoming presidential elections in Cote d’Ivoire, and the potential fallout, provide some bullish potential with the incumbent president promising to hike farmgate prices if re-elected. Furthermore, the potential for civil unrest is heightened in the periods preceding and following elections in a country with a volatile political history. Trucks transporting cocoa to export terminals are often targeted during periods of civil unrest. 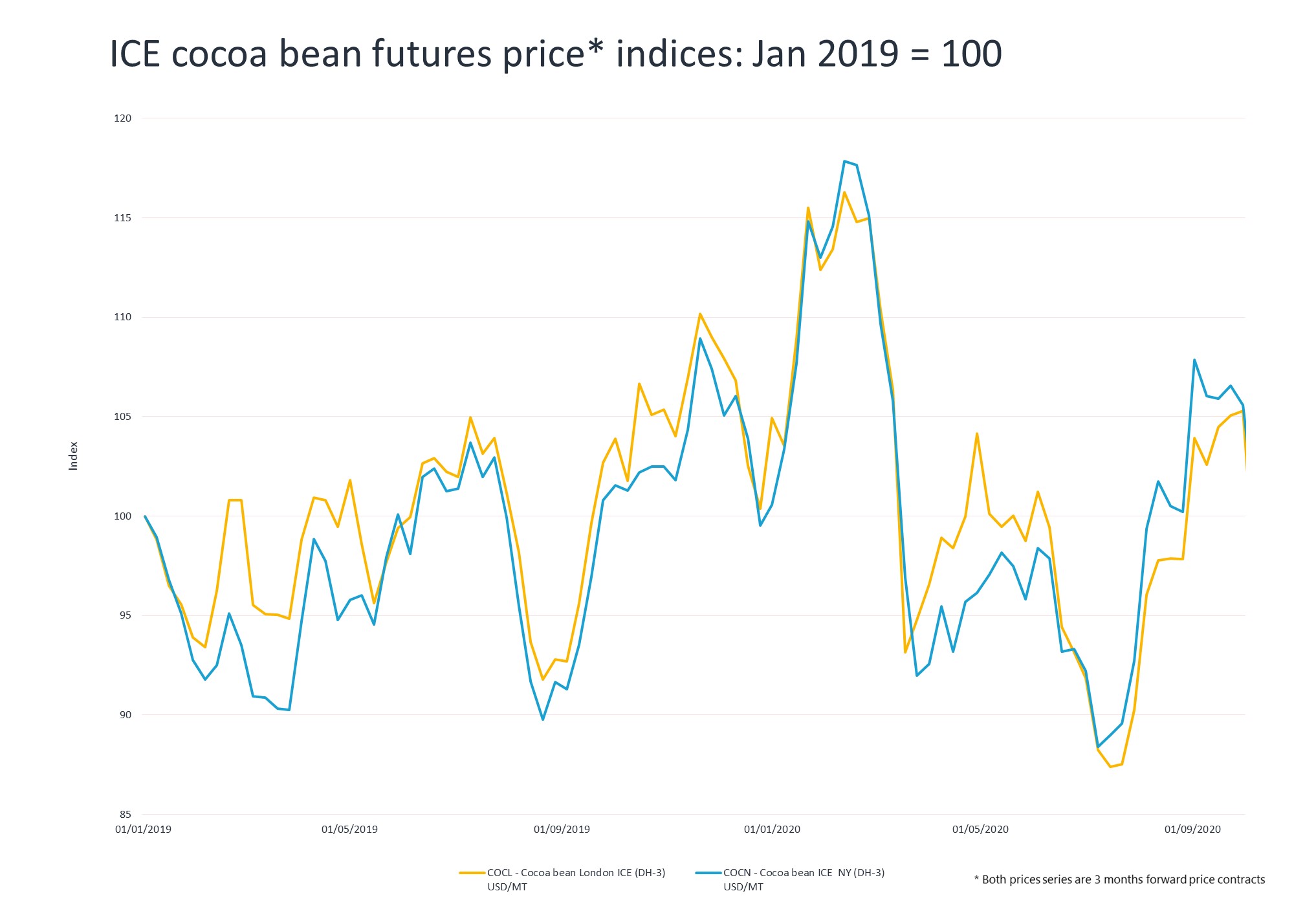