Testliner prices fell in December following lower demand during the last 2018 quarter. Low seasonal European demand due to the holiday season kept the prices down for recovered paper, feedstock for testliner. In addition, increased capacities in Europe for recovered paper and elevated level of inventories are also generating concerns about oversupply on the market at the beginning of 2019.

Steel prices have shown signs of weakness since October last year as low food harvests and modest automotive production in Europe have affected demand from the manufacturing industry. The cold-rolled price decline is also attributed to uncertainty over European steel safeguards and the UK’s imminent exit from the EU.

UK polypropylene prices fell m-o-m in January following the decline in crude oil and naphtha prices. West Texas Intermediate and Brent Crude oil prices fell in January due to concerns over low crude demand, whilst growing US oil stocks continue to weigh on the market.

Polystyrene prices in the UK dropped due to a decline in the price of feedstock, styrene. Styrene prices fell in January due to ample supply, despite the unscheduled outage of a major production plant in the Netherlands. However, January’s decline in prices was not as steep as in previous months, with low prices encouraging demand as buyers are wanting to take advantage in expectation that prices will increase in the coming months. 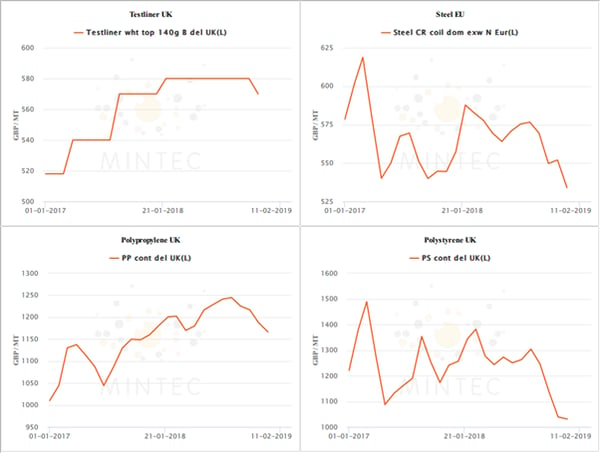