The purpose of this Brexit food price index is to measure the changes in the price of selected food categories that are reportedly highly sensitive to the outcome of the Brexit process, particularly since the referendum in June 2016. The index will be updated and reported on a monthly basis.

The overall index (Chart 1) shows a spike after the referendum and has since been maintained at this high level. Various categories have driven the index at different points; however, the drivers have not been limited to Brexit, as discussed within the various categories below. 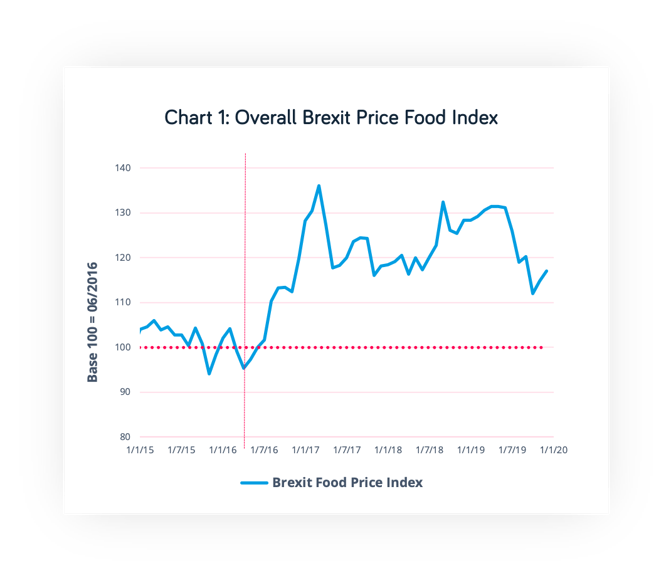 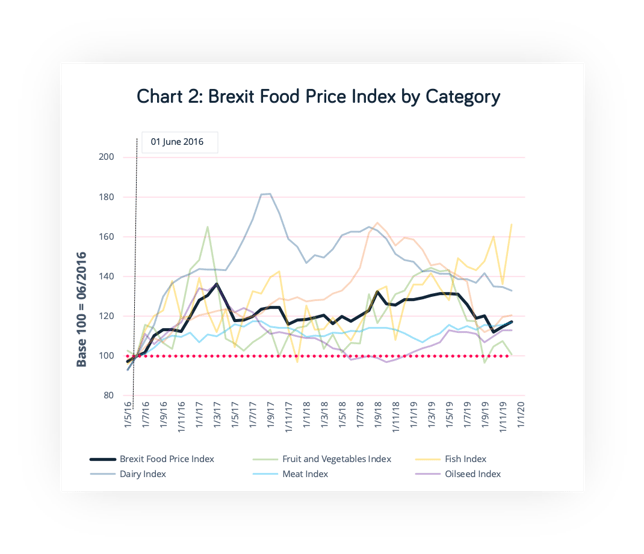 Fruit and Vegetables
The UK fruit and vegetable index dropped by 6% in December compared to November. Higher tomato supplies from the Dutch market has weighed on prices. Heavy rains seen over a few weeks in October and November resulted in extreme flooding, which continued to strengthen UK potato prices in December. For the onion market, increasing supplies of onions from the Netherlands and Egypt into the UK has resulted in lower prices. Also, a larger availabity of British apple led to lower apple prices. Thus, a decline in apple, tomato, and onion prices have weighed on the fruit and vegetables index.

Meat
The UK meat index increased slightly by 1% m-o-m in December, driven by an increase in UK beef and pork prices. UK pork prices remained strong in December on the back of booming shipments, which rose 13% y-o-y in November, to reach 22,400 tonnes. Total pork exports to China between March and December 2019  more than doubled that of the year before, whereas exports to the EU were reduced during the same period. Similarly, beef prices were also driven by an increase in exports by 23% y-o-y in November to reach 12,800 tonnes, supporting price increases. Throughout 2019, beef exports continued to track above 2018 levels. Overall, an increase in demand during Christmas has been the main contributing factor to the upward movement in the meat index.

Dairy
The UK dairy index declined slightly in December, falling by 1% m-o-m, mainly influenced by lower prices of butter which were down 3.5% from November. Butter prices traditionally fall in December, signalling a slowdown in festive demand.  In 2019, prices for Christmas-related dairy products fell further and sooner than expected, according to the AHDB.

Grains
The UK grains price index increased slightly by 1% m-o-m in December, although significantly higher (20.5%) compared to the beginning of the referendum in 2016. UK grain price continue to increase m-o-m, driven by concerns surrounding the new wheat and barley crop. Planting progress in the UK has been very inconsistent due to significant rainfall impacting the winter wheat planting. Additionally, gains in the global markets have also reflected on domestic market prices.

Fish
The price of UK cod rose significantly in December (22%) compared to the previous month, driven by lower availability towards the end of the year, as most vessels had ended their quota and were held at the ports. Besides, higher demand for cod in 2019 has supported the price increase contributing to an increase in imports of cod from other main suppliers in the EU. As a result, UK cod prices were 31.4% higher in December than the same period in 2018.

In December 2019, cod quotas for 2020 in the North Sea were agreed to be cut by 50%, further adding upward pressure to prices on the back of anticipated lower availability. A reduced quota for 2020 would mean the UK has to rely more on cod imports, to meet its domestic demand. Almost 80% of the cod eaten in the country is imported; as most cod suppliers’ prices were higher in December, and UK cod prices reflected this trend.

Oilseed
The oilseed index remained unchanged m-o-m in December, as prices remained relatively stable due to expectations of a higher 2019/20 crop, up by 2.5% y-o-y and 8% above the five-year average. However, the higher than average temperatures experienced across Europe could impact yields, and thus overall production for the season. Ukrainian sunflower seed prices declined substantially in the latter half of last year, driven by projections of a record high crop. Thus, fundamentals in the Ukrainian sunflower seed market have been key to the bearish trend seen in the global market last year. The oilseed index is expected to be driven by the global vegetable oil complex in the short term, as the complex recently experienced price increases across all oils, following a surge in palm oil prices due to Malaysia’s supply deficit.

Conclusion
The Mintec Brexit Food Price Index has experienced a monthly increase of 2%, as the increase in the fish, grains and meat indices more than offset the decreases seen in the fruit and vegetables and dairy indices. Although the overall index has decreased by 8.9% compared to a year ago, it has increased significantly by 17%, compared to the start of the referendum in 2016, driven by various market developments.

It is expected that the commodities within the Brexit index will continue to be driven by  market fundamentals, as the uncertainty around Brexit continues to reduce. Part of the uncertainty has now been removed, following the UK general election results on 13th December , evidenced by the strengthening of the pound, which saw a daily increase of 1.7% against the Euro. The pound also reached the highest level against the USD, since May 2018. Currency movements will continue to remain vital to commodity prices, and will be the key factor to look out for as Britain leaves the EU on 31st January.