Wheat – European wheat prices have been rising slightly since mid-September, driven by strong demand and diminished domestic supply as a result of the summer heatwave, which caused prices to peak in August. Continued heatwave and droughts throughout autumn, hitting Northern and Western Europe, have further supported the prices. Consequently, European wheat production is projected to decrease 9% y-o-y in 2018/19.

Maize – US maize prices have been rising since mid-September, benefiting from increased global demand and low competition.  Crop yields in other major producing countries, such as Argentina and Australia, have been adversely affected by poor weather this season. US maize exports are forecast to reach a record high, up 1% y-o-y in 2018/19.

Rice – Thai rice prices have been subdued, driven by a lower demand. Consumers are searching for alternative suppliers as rice production was affected by dry conditions in the northeast region of Thailand, limiting supply. Most of the demand has been shifted to India and Vietnam. Consequently, Thai rice exports were revised down 6% m-o-m in December, whilst Indian and Vietnamese exports are forecast to increase 3% and 5% y-o-y respectively in the 2018/19 season. 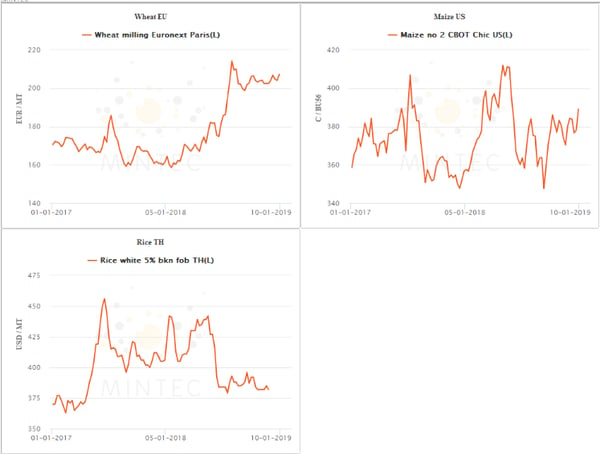